skip to main | skip to sidebar

With yet another false dawn gracing the sky it is time to dust off this here blog and attempt to return to a reasonable schedule. After some deliberation it has become clear that what I do isn't enough to solely warrant a blog for that purpose, so from now on I will be salting it with information I hope you will find interesting.

Starting with some good news, I have in my possession final pages from my WORK anthology stories that I posted pencils and some inks for at the turn of the year (eight months ago - damn). They turned out really well, as you will hopefully see at the bottom of the post, and as my first short stories to be accepted and make it to completion, this makes me happy.

Sadly however there is some bad news. The WORK anthology has yet to be picked up by a publisher. Although this isn't surprising given the economic climate and any number of other factors we could moan about, it is unfortunate that the excellent work of the creators doesn't seem like it will get the exposure it deserves. Though life doesn't have much to do with deserve does it? Fortunately there are other avenues to pursue and I know that the editors have already begun the process. Fingers crossed and if nothing comes of it I will be posting the two stories for free download on this blog, until then here are the final page 1's for both stories.

Only a Miner Killed Page 01
Art by Chris Fenoglio 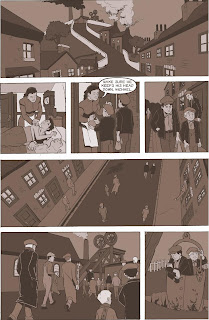 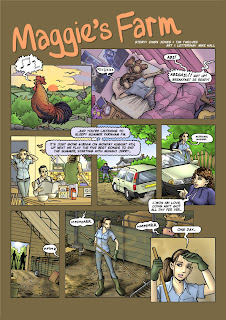 Aside from the not-exactly-inconsequential matter of two months of no posting, the train seems to have been, if not derailed, then certainly shunted off the main track. My search for an artist for Heartless has thus far proved fruitless (ha!) and the experience has taught me much about the process, stuff that only getting-beat-down-regularly is willing to teach. He is a harsh taskmaster.

As a result I have siphoned my creative energies off in two different directions, namely two new stories called, for the moment, Broken Hearted and Signal. With Heartless as a guide I've made good progress on both, having almost fully broken down Signal to the point where I can write script pages. Broken Hearted is a little more in the can-I-do-this and if-so-how phase, trying to work through story and world problems that have resulted mostly from the setting.

What I have noticed is that most of the story ideas I want to develop incline toward science fiction, Warren Ellis aside there doesn't seem to be a great inclination within comics to write interesting science fiction and part of me would like to see that change. Another part of me would rather it stayed that way so I can corner the market but seeing as I can't-even-find-an-artist at present, perhaps I'm being a little optimistic. Or, you know, wildly, idiotically optimistic.

Apologies for the hyphen madness, it was intentional.
Posted by Owen at 11:42 No comments:

An update! After two weeks of escape and evasion I have returned with news. Heartless is currently picking up some solid momentum, though it's taken longer than I hoped (doesn't everything) I have winnowed the beast down to a four issue mini-series as the final story in a larger world. To continue the arse-backwards theme I have managed to write a first draft of #2, don't get me started, as well as all the scene breakdowns for the other three issues. The bible has been updated and I should be posting some more snippets, he says crossing his toes and rubbing the lucky rifle badge, in the not-to-distant future. It will also signal open season on unsuspecting artists who want to draw city samurai and psychodelic dream worlds. The point of no return beckons.
Posted by Owen at 23:05 No comments:

If it is easy then I'd be concerned. I struggle to write, everyday is about wondering whether I’ll make the connections in a story and be able to write about it. No doubt I’m not alone in this. Everyone’s been in a place where you just stare at the screen for an age without managing to add anything of value. I know there are all kinds of theories for getting on; leaving the piece at a point where you’ve got more to write, doing a prescribed amount of work then stopping no matter what, finishing in the middle of a sentence you can pick up next time you sit down to write etc. The problem for me is if I’m on a roll, writing for all I’m worth, then I don’t want to stop. It seems like the easy option to say ‘Done my bit for the day’ when it’s evident to myself, if no-one else, the words are ready, willing and able to continue. But by the same token, writing until you’re flush out of ideas/inspiration, leaving yourself a flickering screen full of frustration next visit, isn’t exactly ideal either. Hence the dilemma.

Personally I’m beginning to find that sitting down to write only becomes unbearably difficult when I don’t have a plan. Writing the script isn’t easy, but it’s the easiest part of the process because by that stage the story is fully planned out, broken down into manageable chunks and all the dots have been joined. Getting to that stage is where all the effort and frustration come in; teasing threads of story out of the loosest connections, melding characters based on a feeling, throwing away bits you like that don't work, this is the skill of a writer and it ain't easy.
Posted by Owen at 23:44 No comments:

Diamond's not a creator's best friend

In case you haven’t heard already the comic mountain’s gotten a little steeper in the last week to ten days. Diamond Comics Distributor Inc., the distributor for pretty much all of North America’s comic books and other associated merchandise is raising its minimums. Instead of the current standard whereby every item would be expected to earn the distributor $1500 before it would be offered through the direct market, Diamond has raised the standard to $2500. This equates to a significant two-thirds increase. People smarter than myself have crunched the numbers and pointed to the fact this now means for an item to justify its listing in Diamond's Previews catalogue, from which retailers order the vast majority of their stock, that item would now have to make $6250 retail. In other words OUCH!

Realistically I haven’t made a published comic yet, but while this is still down the list of issues to worry about in terms of progression, it is by far the biggest. I can honestly say it worries me no end. I’m still going to make comics and this will unquestionably make me raise my game because the stakes have gone up. It also mean though, there is no room for error and you may need lady luck on your side a bit more too. When even popular, award-winning creators and products step away from the industry due to this turn of events, it says loud and clear that there is absolutely no learning period for new creators. Got a quirky little gem hoping to find a niche? Good luck with that. With a lot more on the line every time a project is conceived I think a major concern for the industry has to be that the type of title on offer doesn’t narrow to spandex and superhero derivatives. There’s far too many of them about as it is and the loss of range in the indie and alternative comics sections would be a real disaster for creativity. Or, if you like, the potential for creativity with people thinking in a narrower mindset.

Tom Spurgeon’s article at the Comics Reporter here explains why this situation is bad far better than I can. I guess all eyes will be on the DM for the foreseeable future, to understand what exactly the changes mean and how it will affect the industry.
Posted by Owen at 00:49 No comments:

I was lucky enough to get a look at another writer’s, Chad Michael Ward, project bible a few weeks ago. I have started one for Heartless, as you may have seen below, but as with all things writing his and mine were quite different. What I found most interesting were his scene breakdowns. Working as I had been in beats within a single issue (or the equivalent of page wise), I was used to smaller units of story at that stage. Seeing five or six large blocks of story with specific beats inside, as the scene breakdowns were, made a whole lot more sense. Although technically it is adding another stage to the process, what it does do is allow a smoother breakdown from a single paragraph for that block of story, to several segments that make it easier to script.

Luckily this came before I’d fully understood and broken down Heartless’ storyline, so that issues 2-4 and possibly 5 if there is one, are going to be easier to work out. Looking at how it works now, it seems like an obvious step, which makes me wonder what else I’m missing on the road to a final draft. Obviously learning is part of the process and in some cases can only be achieved by doing, but I am concerned that I may not have enough of the theory and basics in my head to think I can write a decent script at this moment. That’s not going to stop me trying but [note to self] I’m going to try and spend an equal amount of time reading up on writing.

So if anyone does have suggestions on good books/articles/resources, please let me know.
Posted by Owen at 18:45 No comments:

Back with a Bitch

My best intentions were defeated by a series of shitty events called Life. It tends to get in the way of planning occasionally and last month it chose to obstruct me no end. So rather than write I ended up doing critiques of other creator’s writing they'd sent me, something that ended up being both enoyable and valuable. The crazy thing about looking at someone else’s work is how clear everything seems to be up to a certain level. Why a medium shot here when a wide shot gives much more scope to the artist, do you need a caption there? etc Removed from the involvement of creation, analysis seems comparatively easy. I guess that's why there are so many critics :)

I’ve found it quite enlightning, both in gaining knowledge of how to tell my stories and understanding how narrow-sighted the initial creation process is. Given my own scripts to analyse in the same way I would fail miserably because I have not yet become as discerning and dispassionately cutthroat about my own work as I can be about others. Inevitably you’re attached to your work while it’s being formed, or I imagine you should be, so one of the hardest things to do is judge it’s worth commensurate with your present ability. Harder still is that I like my stories and the frustration that I’m not able to just sit down and put the whole piece to bed in one sitting, kills me sometimes.

Partly, I think my attention span has just dwindled badly since university, my own fault no doubt, and also I haven’t found a means that I’m happy with of turning story idea into script quickly enough to not get distracted or frustrated. Despite my lengthy process post earlier, it’s not proving as fertile and conducive as I’d like. But I have recently found out a few things that helped in altering ‘my way’ and I’ll detail these later in the week. [/End Bitch … hopefully]
Posted by Owen at 00:58 No comments: